Can I Get Life Insurance If I Have Epilepsy? 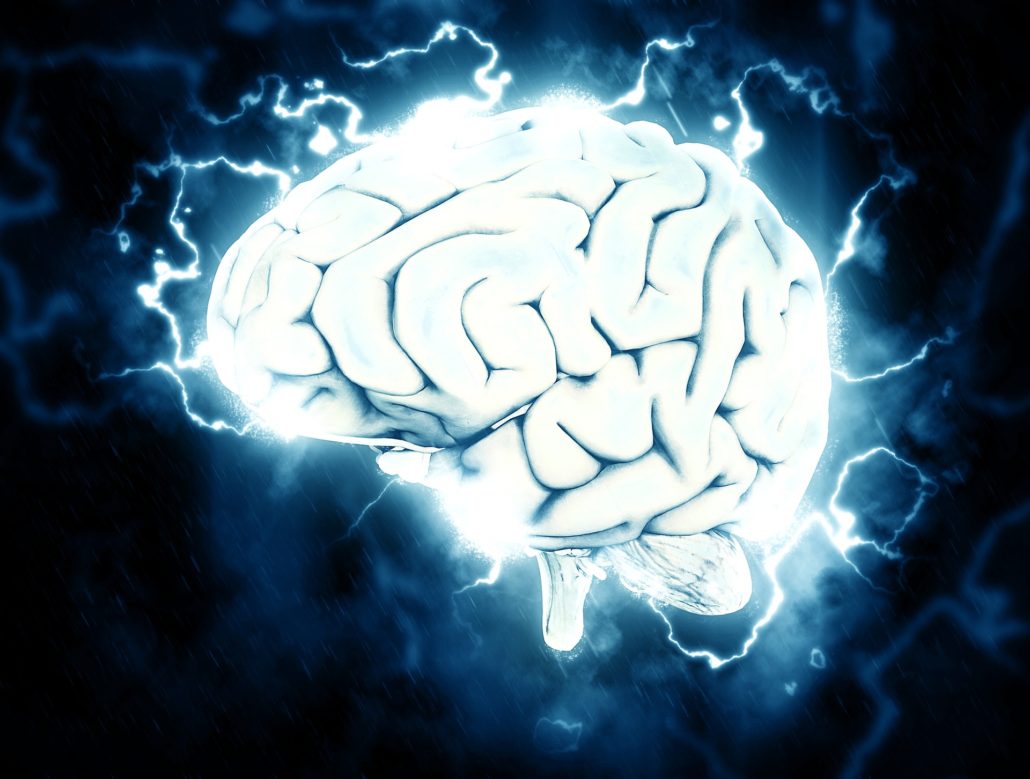 Yes. You may be rated differently from company to company, but you will not be denied automatically. Depending on the severity and frequency of the episodes, you may be able to qualify for a Standard rating depending on the life insurance company’s underwriting guidelines pertaining to epilepsy.

If you have epilepsy, you may worry that you won’t be able to apply for life insurance coverage or if you are granted coverage, it will be restrictively expensive. Maybe you’ve found yourself putting off the search for a life insurance plan completely because it’s overwhelming and stressful to sift through all of the information. However, it may be helpful to consider the fact that epilepsy is far from an uncommon condition. In fact, the National Institute of Health reports that about 3 million Americans carry an epilepsy diagnosis, which translates into a statistic of 1 in every 26 people. With epilepsy being the 4th most prevalent neurological disorder, it shouldn’t surprise you to learn that many people with this condition apply for and receive access to life insurance every day.

While your hesitation may be justified, your fears may also be completely unfounded. Depending on the severity of your condition as well as your personal habits and overall medical history, you may be able to access a more affordable plan than you expected.

Let Us Shop The Best Insurance Companies For You

We can get you covered.

Don’t Hesitate To Start the Process

The more you delay applying for life insurance, the more likely your age will cause your premium to increase; therefore, it’s important to start thinking about getting a plan early. Just having a working knowledge of what insurance companies require and how they deal with cases of epilepsy will help you better navigate and advocate for yourself when you’re looking for the best plan. When you know what insurers are looking for, you can also make slight adjustments in your own life, like committing to an exercise regimen or organizing your medical documents, to make the process simpler and easier for everyone.

Here’s a comprehensive guide to the ins-and-outs of epilepsy and life insurance.

Epilepsy, or seizure disorder, is something of an umbrella term for a condition that varies drastically from person to person. The way that people experience seizures as well as how they take care of themselves between seizures depends on a variety of factors and makes everyone’s experience a little bit different.

What does this mean for life insurance providers? In order to offer you an appropriate plan, your life insurer needs to assess the way that epilepsy manifests in your life. For example, a person who has occasional seizures but has managed them with medication and maintains a health care routine as prescribed by a doctor is going to pose a different level of risk than someone who has frequent seizures or comorbidity (or more than one condition at a time.)

In general, you’ll be able to talk extensively with an underwriter in order to create a more holistic understanding of your condition. Before you sit down with this person, it’s a good idea to get a sense of the questions they will ask and why. 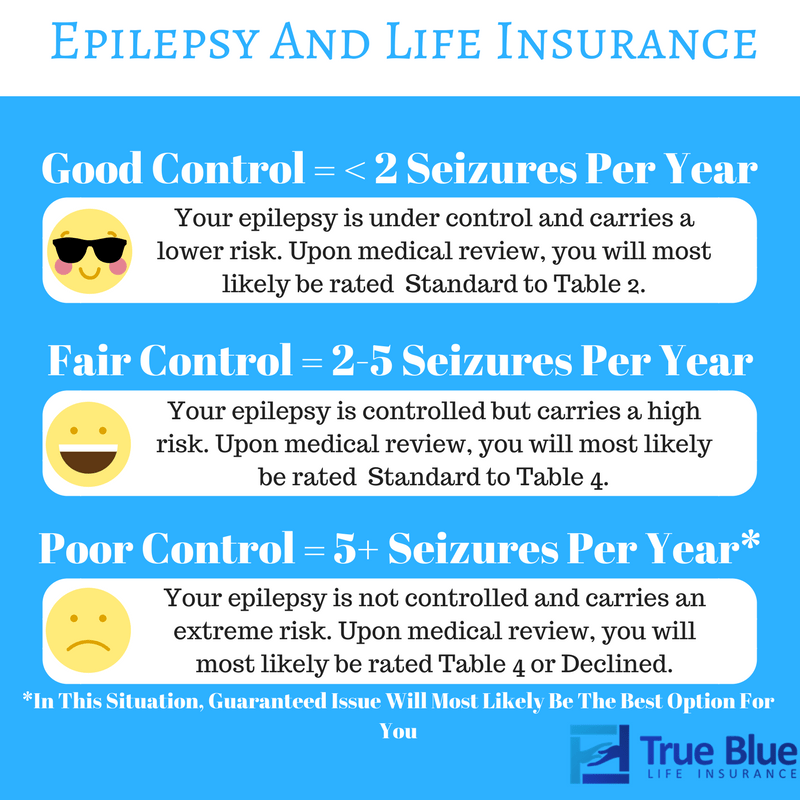 Process of Diagnosis and Treatment Plan

The first thing your underwriter is going to want to know is the medical trajectory of your epilepsy: What was the date of your first seizure? Have you since been formally diagnosed? How long ago was the diagnosis? Was there a specific treatment plan?

Any information that you can provide about these early interactions with a doctor are crucial to beginning the conversation about your epilepsy.

The Type of Seizure

Much of the time, life insurance professionals looks to healthcare field to gather information on conditions like epilepsy. From what they’ve gathered, there are a few distinct types of seizure disorder that may come with different life insurance plans.

While you may be well-versed in your particular diagnosis, it’s also helpful to learn more about other types when you’re going through an application for life insurance:

Petit Mal or Absent Seizures: This very rare type of seizure is characterized by 15 or so seconds of abnormal brain activity. There are generally no warning signs, and looks like a brief moment of non-responsiveness, like daydreaming

Focal Onset Aware Seizures (previously called Simple Partial): This seizure occurs only on one side of the brain in which the person remains conscious, and lasts about 1 or 2 minutes.

Focal Onset Impaired Awareness Seizures (previously called Complex Partial): As the name implies, this type of seizure is similar to the previous one but without the same level of functioning and awareness. They usually last mere seconds to up to 2 minutes.

Gran Mal or Tonic-Clonic Seizures: Significantly more physical than other forms of seizure, this one consists of a phase of full-body muscle tightening and loss of consciousness followed by spasms. The entire seizure may last for 3 to 4 minutes. Note: When laypeople think of epilepsy, this is generally what they imagine. So, it’s important to be able to inform your provider exactly what your seizures look like.

To an insurance company, these differences can be influential in assessing risk. The difference in length of the the seizure, impact on motor functioning, and level of consciousness during and after are all important indicators of Within each of these categories, there is a great deal of variety in functioning. Some people may also experience more than one within a given time period, with one type preceding another. And because of these differences in individual cases, it’s very important to be honest about how seizures manifest in your life.

A few other questions that may come up are the amount of seizures you typically have per year and whether you’ve had any seizures lasting more than thirty minutes.

Another key distinction that is important for an underwriter to know is whether your seizures are idiopathic (without a known cause) or symptomatic (due to an identified stressor or substance.) The difference is influential because when seizures are predictable, they may come with a lower risk.

In terms of impact on your life insurance plan, the steps that you’ve taken since your diagnosis is probably the most important piece of information. That’s because your life insurance provider wants to know that you’ve taken all available steps to manage your seizures, the most fundamental being keeping up with your doctor’s appointments and following through with your treatment plan.

In addition to your diagnosis for epilepsy, your underwriter will also be interested in the other areas of your medical history. If you exercise regularly while paying attention to nutrition and manage your overall stress or mental well-being, you’re going to have access to a better insurance plan.

At this point you may be thinking about your own case and worrying that an underwritten policy may not be right for you. Maybe you’ve had a few years that made it difficult to follow your treatment plan, or maybe your seizures are frequent and unpredictable. That doesn’t mean that you have to give up the search for the right life insurance plan. Here are a few options that you can explore:

Don’t Hesitate To Take The Next Steps

Regardless of the severity of your epilepsy, you deserve to have access to a quality life insurance plan. While this guide was meant to help you understand a little bit more about what kind of coverage you can get and the role that your medical history will play in your options, it’s always best to gather all of the information you can and talk to a provider.

And, always, don’t be afraid to advocate for yourself. By asking questions and knowing the ins-and-outs of your particular case, you can find the life insurance plan that is perfect for you.

Let a True Blue agent shop for you to find the policy you need, even with a history of epilepsy. We have contacts to underwriters from multiple insurance companies and can send private inquiries to find the best policy. This is a specialized process and an Agent needs to assist you.

Instant Issue Company Chart
Scroll to top
The time to get insured is now!
We make buying life insurance easy. It’s our job.
Get a Quote